WE at HINDRAF are strongly opposed to how the UMNO led government is persecuting Suaram through its media to create an ugly  shadow of anti-nationalism on the part of Suaram. This is very similar to the campaign mounted by UMNO against HINDRAF after the Nov 25, 2007 rally. 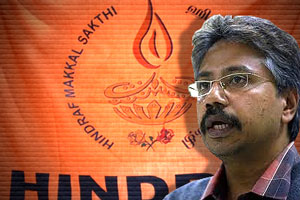 SUARAM came about after Operasi Lalang in 1987 when it was clear that there was blatant disregard for democracy and human rights mattered very little without the necessary checks and balances. Protection and promotion of human rights does not need any justification as these are the natural rights of all human beings. But yet under the strong arms of a bullying UMNO government these rights had to be defended and quite strongly so. Suaram took up the challenge. This is a most patriotic move.

Now with the UMNO leadership under attack from the truth telling and human rights defence work of Suaram, a witch hunt has begun against Suaram in the form of this persecution. Create the slurs against Suaram and take away their credibility so black may become white  – is the logic of this scurrilous campaign. Attempt is being made by the UMNO leadership to bury the truths that Suaram is unearthing that is inevitably going to tip their apple cart.

We at HINDRAF stand in full support of SUARAM in their initiative to tell the truth and to defend human rights for our society in Malaysia. No matter what UMNO tries, Malaysian politics is now pregnant with all their ugly truths to come out soon in full display. Suaram would have played a significant role in exposing much of that and we will work alongside Suaram in all their truth telling work in the country.