The Malaysian Education Blueprint (MEB) 2013-2025 is said to be ‘frank and bold’ and purports  to propel our education system to world class standard. It however overlooks an ‘unintended consequence’ — the blueprint would result in marginalizing and destroying multi-lingual education and pose threats to the continued cultural sustainability of our multi-cultural nation.

Thus, while the preliminary report of the blueprint in comparison with the National Blue Print 2006 – 2010 and the Strategic Interim Plan 2011-2020 accommodate arguments in favour of diversity and multiculturalism it nevertheless grossly limits that to learning of an extra language.

The assumptions it is based on and the vision of Malaysia it projects seems neither to take into serious consideration local educational development, histories and aspirations of Malaysians nor international concerns on diversity and multiculturalism.

An Extra-ordinary and Ambitious Blueprint But Setting an Agenda for What Kind of Future? 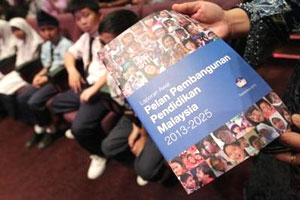 In 2006 the government allocated a sum RM 23 billion in the budget for the National Blueprint 2006-2010 that was supposed to have made our children think out of the box. The emphasis contained in the current blue print implies that the earlier version was a failure.

Malaysia ranks below international average in the Trends in International Mathematics and Science Study (TIMSS) in 2007 and bottom third of 74 countries in the Programme for International Student Assessment (PISA) in 2009.

The Deputy Prime Minister has indicated that he will be requesting a special budget for the implementation of this blueprint in three phases over next the 13 years. In the 2013 budget, a sum of RM 38.7 billion has been allocated to the Ministry of Education for operating and development expenditure, RM 500 million for programmes under the MED and another RM 1 billion as special fund for immediate infra-structural needs – in total RM 40.2 billion or 16 per cent of the 2013 budget.

The noble intention to allocate 16 per cent of the budget is to elevate Malaysia to the league of countries with best education system.

This ambitious project is conceived at a time of exceptional political awareness. The desire of the leaders to critically examine our education system is highly commendable. The colourful launch of the blueprint on the September 12 by the Prime Minister and the Deputy Prime Minister   underscores its relevance and importance.

At the launch the Prime Minister was hopeful that our educational system would meet the needs of the new economy centered on knowledge, innovation and technology. The Prime Minister is optimistic that it will prepare our children for jobs that are yet to exist. For global competition, he wants Malaysians to be bilingual if not multilingual.

These aspirations augur well for the nation. It demands the best out of everyone. The plan identified eleven strategic and operational shifts from the current environment. The eleven thrusts are for all to relate themselves in one way or the other –  in creating an equitable and value driven education, creating teaching as a profession of choice, empowering stakeholders, quality delivery with modern technology, value for money at every phase with increased transparency for public accountability.

Even as we laud these aspirations, we need to do a thorough social and political impact assessment of the aspirations in the form it is being promoted. We need to understand where it will take us. 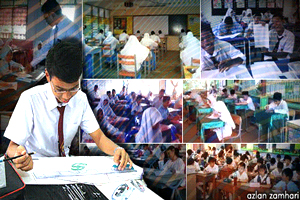 There is an obvious divide in the minds of the policy makers. While they want the children to think out of the box, they left out something significant. Our system of education at the primary level is a combination of national schools and vernacular schools.

In addition the number of non-Chinese children enrolled in the Chinese medium primary schools is fourteen per cent and is increasing. These are hard facts that are not adequately dealt within the blueprint. In fact the blueprint is centered on the national schools with the hope of creating them as a school of first choice with Chinese language, Tamil language and Arabic offered as a third language in addition to other global languages.

In this context the vernacular schools are left out in the blueprint. The discussion on diversity and multiculturalism in the blueprint was dealt only within the framework of an additional language for communication and trade.

The vision to create national unity through education requires broad and clear thinking. It cannot be achieved when we are fuzzy about national unity and/or education. In the past, among other things, the vernacular schools were regarded as a tool by the British to divide and rule.

Despite such arguments, the nation was united in demanding for self-rule with a multiethnic political fabric. We survived all trying moments as a multilingual, multicultural and multi-religious country and have enriched ourselves in the process and made them as our strengths. We promote ourselves as such to the world outside, as shown by our national tourism activities.

Together we have recognized the Constitution as the supreme law guaranteeing the tenets of these strengths. The growth in the last fifty-five years is enviable. The co-existence nurtured by tolerance and acceptance opened up avenues for respect and dignity.

But, in the process, the notion of nation-state concept of single identity was proved illusory. Assimilation is no longer an option for Malaysia. Anyone who demands that today shall be frowned upon as being a demagogue in the modern state of Malaysia. It is also not possible in the era of new communication technologies.

The time has come for us to bury our fears of losing our self-identities. The Malay language is spoken in every nook and corner. The English language is finding its way into our lives as we need to link with the world. Why then are we on the path to creating a nation with a single identity?

There are enough experiences around the world to show that multiculturalism can expand opportunities and horizons for people in many ways. Restrictive policies that deny growth of ethnic identities are becoming less popular.

People want a sense of belonging to be proud of their origin, culture, religion and language. This is an intrinsic phenomenon, emblematic of human progress. It is inalienable. In Malaysia we are fortunate to have this happening in our own lifetime.

The cooperation and peaceful coexistence in a single state polity is an excellent example in the world. We are proving that national identity need not imply a single homogenous cultural identity.

Blueprint with Blindness? Inclusion of Multi-lingualism but Perfunctory Effort at Erosion of Vernacular Education

The Education Blueprint in this context requires some strong rebuttal for its evasion of multilingualism and multiculturalism.

The blueprint states that the ultimate objective is for the National schools to be the school of choice such that interactions between students of different socioeconomic, religious and ethnic backgrounds naturally occur in school. 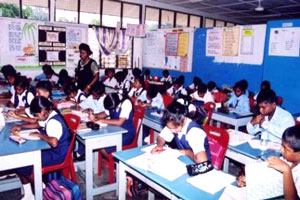 The rational is to achieve national unity by getting the children of all races to go to national schools. But the practical reality is that a substantial number of children are enrolled in vernacular schools (about 96 per cent of the Chinese children and 56 per cent of the Tamil children go to Chinese and Tamil medium schools).

The parents of all these children want mother tongue education for their children for the building and the preservation of cultural heritage, identity and dignity. One cannot dismiss this as being divisive or that promotes polarization.

Are we blind to the true facts of polarization? Affirmative action and positive discrimination policies were introduced in 1971 through New Economic Policies to eradicate poverty and economic restructuring to eliminate identification of race with economic function.

Since the 2nd Malaysia Plan, over the last forty years the country has transformed itself into Malay centric nation with institutionalized racism. The quota system intended to benefit poor Bumiputras is never colour blind to the needs of the poor Malaysians. Polarization originates out of  discrimination and not due to mother tongue education.

Identity politics is an inherent feature of our life in Malaysia. The Federal Constitution has seventeen articles and three schedules that expressly recognize identity of race, religion and language of the majority ethnic community.

One need to take as given that identity on the basis of race, religion and language are here to stay unless we are ready to amend the Constitution, and expunge it of all identity-related terminologies. It will destroy all that is colourful and culturally rich in Malaysia. It is like putting our hand in the hornet’s nest.

Therefore, the neglect by the government to address the vernacular education system in its blueprint is a fundamental violation of the rights of the children who are enrolled in these schools. It is indeed a violation of our constitution. There is ample evidence to suggest that at primary level mother tongue education is pedagogically the best medium for the wholesome development of children.

The Prime Minister’s vision to create children who are creative, critical and who can compete globally should be given the best the government can provide. The government cannot be selective in its policies. If a child aspires to acquire its human capital advancement in a Tamil school or in a Chinese primary school, are we to condemn its progress due to imagined fear of racial disunity?

In fact, we should realize that only such neglect and marginalization would create greater discord and disunity among the races.

The United Nations Development Report 2004, captures the need for multilingual education aptly. It argues that efforts to impose homogeneous cultural identity can lead to social tensions and conflicts. It articulates UNESCO’s proposal of a three-language policy, one international language, one lingua franca and mother tongue language. It calls for recognizing all the three as official languages.

For Malaysia, we need not go that far. We just have to recognize the right for mother tongue education, to embrace it and to enhance the existing vernacular system with adequate funding and support. For the sake of our nation’s human capital development, the country can ill-effort to neglect the vernacular system. Such a decision is certainly shortsighted and seems to indicate taking a disastrous easy way forward.

I think in addressing the Malaysian Education Blueprint, we need to examine our assumptions and prejudices. The relevant authorities of the government should ask the following hard question to themselves and/or put them to public debate:

Must the drive to build a more creative and dynamic human capital in Malaysia necessarily mean the eventual death of the vernacular system of education?

* Is it creatively impossible to build a multi-lingual educational system that produces world-class standard students?

* Working within the constitutional framework, what vision of Malaysia and its citizenry must the Malaysian Education Blueprint enshrine?

* Have we seriously considered the economic, social and political benefits of multi-lingualism and multi-culturalism?