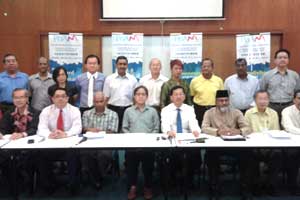 Local educationists have repeated the claim that the National Education Blueprint 2013-2025 does not reflect Malaysia’s multicultural society.

As such, 25 groups forming the Coalition on Plan of Action for Malaysia (GBM) demanded that Putrajaya extend its deadline for the blueprint’s feedback period to March 31, 2013.

They argued that the current deadline – Oct 20, 2012 – is too rushed for the public to comment on a plan that will be in force for 12 years.

Lim said that the government appeared to be worried with the popularity of vernacular education, and as such deliberately left this part out of the blueprint.

With this in mind, GBM presented 31 recommendations that they hoped the government would consider before setting the blueprint in stone.

Among the recommendations presented today (17.10.2012) at the KL-Selangor Chinese Assembly Hall were:

* the inclusion of vernacular, religious and private schools as part of the programme;

* delaying History from being a compulsory pass subject for the SPM examination until key reforms were made to the existing curriculum;

* including the appreciation of multiculturalism and human diversity into the curriculum;

* addressing the issue of school drop-outs;

* decentralising public education, with the focus of education resting solely on the federal government; and

* addressing the growing problem of racial and religious prejudice in schools.

Today, many of the groups claimed that the blueprint did not seem to address many of these concerns. Some even alleged that education was being politicised.

Speaking on history, GBM executive committee member Thasleem Ibrahim said that the blueprint did not cover History as a compulsory pass subject, which he claimed was being “bulldozed” into the system.

“Their political decisions,” he said, referring to government officials, “seem to be overtaking the concerns of the people.”

Thasleem then asked Prime Minister Najib Tun Razak to follow through with the depoliticisation of the local education system, telling the premier to “walk the talk”.

He also suggested that the implementation of the blueprint be delayed until at least 2014, adding that the government needed to review it thoroughly.

Adding to the politicisation of education, Lim said that the blueprint was not a document that appeared overnight, and went through several layers of vetting before it would come through.

As such, he alleged that a political agenda was very strongly inherent in the blueprint.

“Assimilation is not a problem. All of us don’t have a problem with Bahasa Malaysia, but what is wrong with English or Chinese education?” he asked.

GBM members today also got the impression that the government seemed worried with the rise and growing popularity of Tamil and Chinese schools.

The group’s chairperson, Tan Yew Sing, said that Malaysia has an interesting position with its cultural diversity, especially with the rise of China, India and the Islamic world on the global stage.

“Malaysia is blessed to get the advantage of next stage of development,” he said, stressing  that government officials needed to take a stronger view on multiculturalism.

Najib unveiled the blueprint on Sept 11 this year; an initiative, he said, would see reforms  carried out in 11 “shifts” over 17 years.