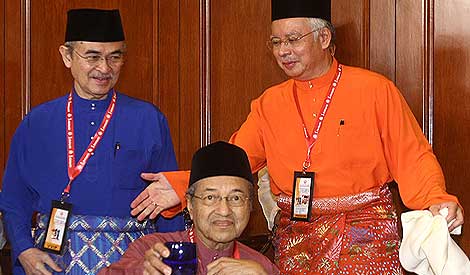 “Neither a man nor a crowd nor a nation can be trusted to act humanely or to think sanely under the influence of a great fear.” – Bertrand Russell (Unpopular Essays)

COMMENT As non-Malay, I have no idea what “rights” I am denying to my fellow Malay(sians). Nor do I see the constant preoccupations of the non-Malays of their communal rights as “racist”. I do think these preoccupations are detrimental to the idea of a cohesive functional multicultural Malaysia and fair game (sadly) when it comes to politics.

Furthermore, I am appalled that these rights are often conflated with human rights or hijacked as a civil rights concern, but the only “racists” I see are those by virtue of their “race” constitutionally created or otherwise demand that their “rights” are upheld at the expense of the rights of others.

Speaking at the Malay Economic Congress, former prime minister Dr Mahathir Mohamad attacked the Malay community in lieu of Umno blaming them for the crisis they find themselves in politically, economically and socially.

Sure, the jibes at the current Najib Razak government fuels shadow play proponents that Umno is in the midst of a vicious internal power struggle but the reality is that Mahathir has always been contemptuous of the community he claims to represent.

He accuses the Malays of being greedy and not taking advantage of the opportunities offered to them. At the same time, he vilifies the non-Malay communities as “foreigners” who would reduce the Malay community to beggars in their own lands. The way he sees it, the Malays would end up under Pakatan Rakyat rule as the Orang Asli under Umno hegemony.

Depending on how you want to play the race game, all this might be true, but the reality is the Malay community as a whole had very little to do with the corruption within Umno.

The phenomenon of hardcore Malay poor (although the definition of “poor” has always been a sore point with the Umnoputras) is testament not of Malay greed or wasted opportunities but rather of Umno incompetence and avarice. If the Malay community is reduced to beggardom, it is because Umno willed it.

If the Malay community is mired in Islamic fetishism, it is because for decades Umno and its allies played the hudud card all the while engaging in policies that would ensure that Malaysians would be divided along racial and religious lines.

It is our fault, sure, but Mahathir does not get to blame the Malay community for the wretched state this country is in without blaming Umno as well.

Left out in the cold

If populist support of Umno is fading, it is not because the Malays are divided but because there are very real class tensions between those in the Malay community who have benefitted from Umno patronage and those who have been left out in the cold.

With its affirmative action policies, subsidies and a host of social engineering programmes that ensured that Malays would dominate the bloated civil service and security apparatus in this country, Umno made it very clear of a line between Malay and Malaysians, and only they would always be in a position of power to enforce this doctrine.

Non-Malay component parties were enablers to policies that would see that the private and public sectors remained ghettos that would feed the narrative of racial tensions between the various communities here in Malaysia.

Nevertheless, let us take it at face value. Mahathir bemoans the fact that the Malays sell off whatever they receive as part of their “special rights” to the non-Malays, which is why they are in the state there are in. Former International Trade and Industry minister Rafidah Aziz has said much the same.

He accuses the government-linked companies (GLCs) of straying from their true objectives of “enriching” the bumiputera (even the Orang Asli and indigenous people of Sabah and Sarawak?) thereby contributing to the decline of Malay influence.

Let us forget the reality of the privatisation of energy concerns and usurpation of private enterprises to Umno coffers and assume that what he says is true, what I would like to know is that Mahathir and his ilk really think that the Malay community is only worth 30 percent of the economic pie? I always said he had a low opinion of the Malay community.

However, what is of greater importance if you are an opposition supporter is that does Pakatan Rakyat think that the Malays are worth only 30 percent of the economic pie?

I have argued that perhaps we should rethink affirmative action policies but this culture of entitlement goes beyond such policies and will forever be an issue if Pakatan does not address the existential crisis that the Umno years has created within the Malay community.

Policies do not exist in a moral or intellectual vacuum and to dismiss their failings as merely failures of implementation is a trap that partisans too often fall in to.

Affirmative action policies based on needs may sound like a good idea (and politically convenient when you claim to represent the majority in need) but what happens when opportunities offered by such policies are not taken? How exactly is a need-based policy as advocated by Pakatan different from BN? How long will this policy be in place? How does race-based quotas factor into to this policy?

As I said, the affirmative action policy is just but one variable in the entitlement culture that Umno spawned but if you are willing to take it on faith that these same policies or something similar to them would be implemented more “fairly” under a Pakatan regime (with all the communal preoccupations that exist within Pakatan) then I say, in a few years’ time we will have the choice between two devils we know.

Mahathir has chastised the Malay community of not taking advantage of the opportunities offered to them and I have no doubt that the non-Malays would take full advantage of opportunities coming their way seeing how they have thrived in the biased years of the Umno regime.

The way that Pakatan handled the National Higher Education Fund (PTPTN) fiasco for instance hints that the entitlement culture that ruined Umno and has had a deleterious effect on the Malay community will still be in play if Pakatan ever comes into power. That and the fact that Pakatan has not offered any details on the alternative need-based approach to affirmative (race) action beyond populist outcries that their way would be a more “fairer”.

And we should never forget that this whole welfare state concept that PAS is extremely keen on promoting has wide ranging consequences on society and coupled with the undelaying social justice impulse of the Islamic faith would have a profound effect on the Malay community if left unchecked. These effects that would be felt by future generations of non-Malays when we eventually lose the numbers game.

Mahathir has always been very clever in exploiting the fear of the community he claims to represent. The challenge for Pakatan is to discover ways of dismantling those fears within an egalitarian framework and not merely dismissing them as Umno propaganda.

If Mahathir and the Malay Economic Congress were interested in reforming the Malay community through an agenda that benefitted the community and not Umno, they would have passed a resolution that an independent Jewish firm audit government departments.

Did I go too far? Not to worry, I am sure that particular crowd appreciates the joke.

S THAYAPARAN is Commander (rtd) of the Royal Malaysian Navy.