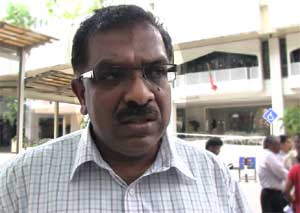 We suggest that Sen. Kohilan study the subject before giving a PC.

Kebenaran merancang  gives full details of the project which is going to  be  implemented.

I am pretty sure he has the minutes of the meetings which he had attended where these matters were tabled back in 2007.

The land was allowed to be converted for commercial use a long time ago before even 2000, when Dolomite was operating a quarry. The whole layout plan for the site – the shops and the condominium – was planned back in 2005/2006 and approved during BN’s time. The “kebenaran merancang” (development order) was given during BN’s time in 2007. It was done in spite of Jabatan Alam Sekitar’s outright rejection of this project in 2007. JAS had pointed out the need for a “setback” (that is, a saftety gap  between the buildings and the hills) as it is prone to landslide.

What were Sen. Kohilan and the other 3 MIC councilors doing when approval was given? Why they did not protest? Do not blame the current councilors or the State Govt. The Pakatan councilors were appointed in July 2008, whereas the Pelan Bangunan was approved on 26 May 2008. During  this period the existing BN councilors were still running the show. Why were they in such a hurry to push through the project?

We will prove Kohilan Pillai is wrong. Will he then resign as deputy minister?  It is not necessary for him to protect the Temple chairman’s hidden agenda. Kohilan  should have protested from day one and not years later as he had done now.

If the Temple has nothing to hide then they should have written to the council. We are ever ready to help. Why must he take to politics and bring M.I.C leaders into the matter? Is the Temple chairman Dato Nadarajah of the view that M.I.C leaders or political means are the only and the best way to solve the matter?

Without a doubt, the then BN councilors and the developer knew that the new Pakatan state government would reject the project and that was why they were in such a hurry to push through the project?